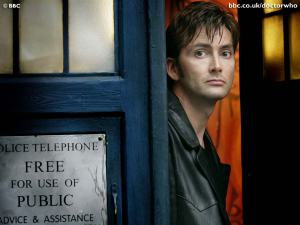 Last night I watched the end of the David Tennant’s run on Doctor Who. I was a mess. And by mess, I mean I was worse than her:

And I still don’t have a Tardis cookie cutter or blue icing. Though I didn’t think his forehead was too big (that line was hilarious) but I did describe his face as “all lumpy” which was a bit harsh and I’m sorry Mr. Smith.

So I’ve spent today reading about the doctor’s death because it bothered me so much. He didn’t want to die. His parting words of “I don’t want to go” ripped my heart out. A lot of people think that Tennant was too “human” but really, he just loved life. And as he said about his regeneration “Everything I am dies. Some new man goes sauntering away. And I’m dead.”

I came across one video that argued that the doctor’s death alienated viewers and made Matt Smith’s job even harder. Never has the doctor not wanted to die. All the previous incantations always faced their regeneration with a certain about of bravery…not a plea to a godless universe. And there is a lot in that argument that I agree with. [See my above comment about lumpy heads].

But then I found this gem in the commentary section from Joe England.

Many other Doctors end on an up-note… serene or thankful or gently irreverent, or they rest in quiet surrender. And there’s nothing at all wrong with that. But really, most people don’t die that way. Because we cling to our lives, because we love living. And never has there been a Doctor who clung so tenaciously, who loved life so much that he railed so fervently against its end, even if it was merely the end of this version of himself. A man who lives in such a way would live forever if he had the chance, and if not, he would fight to live even to his last second. There is no crime in this. There is nothing selfish in joie de vivre. To love life is to love all things in it. It makes his sacrifice all the more noble, since it is perhaps harder for him than for any of the other Doctors.
And you know, I think he did accept it, at the last. And in the midst of this acceptance, his final words are even more a fitting declaration. He does not want it to be over, he wants to keep going, he wants to have fun and adventure and explore and show off. With his last breath he tells the universe that he still wants to be him, that for all his mistakes he still loves who and what he is and that he would go on if he could. He says that he is still alive, still embracing life even to the very end.
What could be more inspiring?

So maybe all my tears were just a sign of a healthy fear of death. When Nora Ephron died, I read her list of things that I’ll miss and won’t miss and remembered thinking that yes, waffles! What about waffles? And no more Paris? No next year in Istanbul? No next year at all.

Maybe it’s cause I’m so afraid that my final thought will be I don’t want to go. Or that it was the final thought of the people who I loved who’ve died. That maybe it is the only final thought anyone could ever really have.

I don’t know. I guess it’s pretty silly to get so worked up over a television show but hey, I’ve always been a nerd at heart. And I guess we get our hearts broken over the death of The Doctor.

So here’s to Mr. Smith (even with his lumpy head). You’ve got big shows to fill. Don’t mess up. Allons-y!