It is a beautifully cool October day today. And yesterday Jay and I went to see  Hamlet in downtown New York at Pace’s Michael Schimmel Center for the Arts. The players were the Globe players, which back in 2009 we got to see in London as a groundlings, an experience I will treasure.

It was cool out yesterday, nice, other than the rain that insisted on dogging us the whole day. We were seated in the front row, far stage left and I did initially worry about sight lines, though needlessly. Prior to the performance beginning, Christopher Saul, who played Polonius and the Gravedigger (and the Priest and a Player, actually) came over completely out of the blue, to chat with  Jay and me. I suspect they can spot a fellow Bardolator, as myself. He asked us if we had ever been to the Globe and I recounted our experience at Love’s Labours Lost as groundlings. Could he not see it upon my face??  He was impressed to be sure. I also informed him that this was the 6th time that the Globe Players had been to Pace, a fact he found surprising. Having seen three of those performances, I did not. Much to my disappointment he did not invite me backstage to meet the rest of the cast and test out the rapiers. Ah, well. 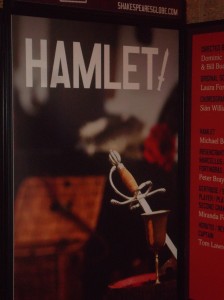 They keep the lights up, just slightly dimmed, throughout the performance to recreate the open air atmosphere at the Globe and what a performance it was! From his first line “A little more than kin, and less than kind,” to his last “The rest is silence,” Michael Benz put on a dizzying, breathtaking performance. The theater crackled with his jocular insanity. From racing up the front of the stage, spitting out the line “To Be or Not to Be” (unlike all the usual dreary soul-searching that line is normally seeped in) to the perfect hum and pause that delivered his shuffling off this “mortal coil,”  Benz had the audience captivated. His moment of realization when he knows that Polonius and his father/uncle Claudius are hiding behind the curtain, having set up his fair Ophelia was pitch perfect. His face as he turns toward the curtain and asks, his voice quivering with knowledge, sadness and defeat, “where is your father?” gave me chills.

There was a madness here to weep for.

And Polonius, who practically ate the “to thine own self be true” line, instead savoring the witty brevity speech he has with the King and Queen. The actors played multiple roles, including Gertrude and Claudius playing the very players that perform for the king and queen. A very clever bit of staging revealed a pitch perfect opportunity for the audience to both watch them watch the performers as well as be them! The New York Times review stated it “could sow confusion” but I promise you, in hands of these deft actors, it did not.

The music and a rather unexpected dance scene at the end had the entire audience clapping along, and then on their feet in adoration.

To say that I was moved, is a grave understatement. The show leaves New York and is on its way to Boston. For those in the region, do yourself a favor and catch it before these talented men and women head back to their home at the Globe.

And what a life, indeed, my dear Hamlet.