Skip to content
So my friend Jen is putting out her novella, a follow up to The Burning of Isobel Key which I reviewed here. I’m so excited for this sequel available January 15th! Here’s all the details:
Cover art by Heidi Sutherlin, 2012.

Cover reveal: the sequel to The Burning of Isobel Key will be available in January 2013!

Ten years after the trip to Scotland that changed her life, Lou is back in the misty, magical country.  This time, however, she’s not on vacation: Lou is there to settle some distasteful and depressing family business.  When Brian, her old Highland fling, turns up, Lou is forced to wrestle with a past that she thought was dead and buried.  As tension between the former lovers mounts, something wicked is stirring in Scotland.  Lou must use all her strength to handle the increasingly desperate situation, but will she be strong enough to battle both a vengeful ghost and her heart?

The Key Inheritance is a novella that takes place a decade after the events of The Burning of Isobel Key.  This contemporary story crosses into the supernatural as Lou discovers evidence of a long-dead spirit who refuses to rest in peace.  Lou may have thought that she was finished with the witch Isobel Key, but her inheritance is more than the young woman can handle alone.

Want to read an ARC of The Key Inheritance? Sign up here for your chance to get an advance copy just in time for the holidays. 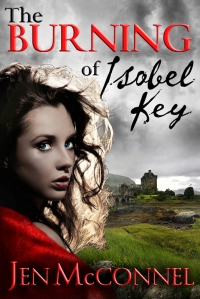 When Lou travels to Scotland, she’s a mess. She’s twenty-six, unemployed, and unsure of herself. It doesn’t help that she’s traveling with Tammy, her best friend, who is everything Lou is not.

At first, the trip pushes Lou towards the brink of depression, but then she meets Brian, a handsome local tour guide. When Brian tells the tourists about the countless witches burned in Scotland, Lou starts to listen. And when she discovers information about Isobel Key, one of the victims of the seventeenth century, Lou finds renewed purpose.

She sets out to learn the truth of the condemned witch, but she isn’t prepared for the knowledge that waits for her. Lou must face her demons if she has any hope of righting the wrongs of the past.

THE BURNING OF ISOBEL KEY, available from Amazon Fall 2012.