I’m still really jetlagged and exhausted and processing what the last two weeks away were like – post on that to come – but in the meantime I needed to share this:

After my diagnosis, as I slowly told the people around me what was happening, I got quite a few comments that I can only describe as ranging from off-putting to down right fucked up. Now, I’m not blaming anyone. I get that people don’t know what to say. It’s hard. Hell, there were times my husband and I didn’t know what to say to EACH OTHER. Searching for something to say, people google things. They offer suggestions to dietary changes or exercise or some random clinical trial that saved their cousin Sal. They tell me that whatever doesn’t kill me would make me stronger. They tell me that now I have to live my life to the fullest, appreciate everything – as if I were taking it all for granted beforehand. I know they’re trying. But often these sorts of suggestions just increased the overwhelming feeling of isolation that I already have. And the feeling of isolation is one of the hardest aspects of having cancer.

Emily McDowell, a cancer survivor, designed these cards to try to fill the huge hole where the sentiment implied by “Get Well Soon” just doesn’t.

“The most difficult thing about my illness was the fact that it was so lonely,” she says. One of the reasons was “friends and family either disappearing because they didn’t know what to say or well-intentioned people saying the wrong thing. So one of the most difficult things about being sick was feeling really alienated from everyone that I knew.”

I think these cards are amazing. More information about her work is here. 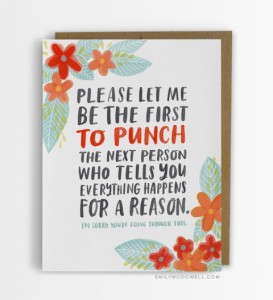 I think they sort of give a voice when there’s so little to say. Also the lemon one, up top, what is that about?? I’ve lost count of the number of people who, upon learning that I had cancer, told me about someone they know who died. What is my response supposed to be to that?

Anyway, good on Emily for making these.

I’ll probably have another post later today about THE TRIP.