Lest one should think that a trip to Dublin is 100% Ulysses-based, rest assured one can see quite a few other things if one is so inclined.

Like The Gresham Hotel where the ending of Joyce’s ‘The Dead’ takes place with that incredible last line (sorry, about the spoilers)

Yes, the news­pa­pers were right: snow was gen­eral all over Ire­land. It was falling softly upon the Bog of Allen and, fur­ther west­wards, softly falling into the dark muti­nous Shan­non waves. It was falling too upon every part of the lonely church­yard where Michael Furey lay buried. It lay thickly drifted on the crooked crosses and head­stones, on the spears of the lit­tle gate, on the bar­ren thorns. His soul swooned slowly as he heard the snow falling faintly through the uni­verse and faintly falling, like the descent of their last end, upon all the liv­ing and the dead.

Best last line of a short story ever – also, my favorite story ever (apologies to Carver and his cathedrals).

And while we’re talking about The Dead, here’s the location of the party that Gabriel attends:

which is right across from the James Joyce bridge!

Hmmm I did say this wasn’t going to be all about Joyce didn’t I?

Okay so one of the other really cool things that Dublin has is a recreation of Francis Bacon’s studio at Reece Mews in London. I saw the outside of the studio when I was in London but what can only be described as “the mess” of the studio is pretty famous. So I was delighted to find out that the Hugh Lane Gallery in Dublin (which is FREE!) has reassembled said “mess”

Dublin also has some great monuments, like the infamous Spire of Dublin (local nicknames include the “Stiletto in the Ghetto” and the “Erection at the Intersection” – cheeky Irish!)

And the James Joyce statue (there he is again!) lovingly known as The Prick with the Stick

Of course the infamous Molly Malone – The Tart with the Cart 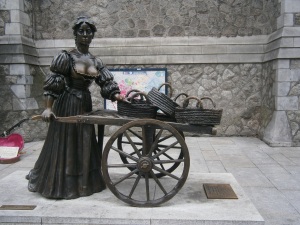 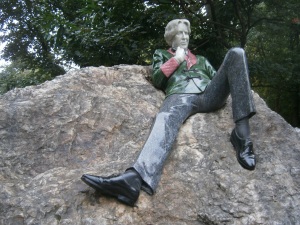 Dublin also has really fantastic museums, like the Charles Beatty Library where I saw a piece of the Book of the Dead and some gospel that were written on parchment oh a mere 60 years after Jaysus Christ.  We also went to Marsh’s Library where they have a table that Joyce wrote at AND actual cages where they used to lock people in with the books. That’s a rather inventive way to combat theft. We also headed out to Trinity College, home of the famous Book of Kells and the Long Library

And no trip to Dublin would be complete without taking a little time out to relax in St. Stephen’s Green

We even managed to get out of the city to see Sandycove, where Ulysses begins. The Irish Sea is beautiful 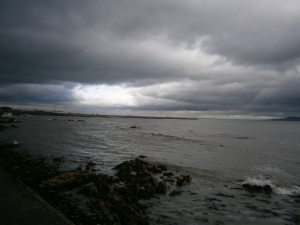 And I got to see Jonathan Swift’s skull (and death mask). Seriously.

And mummies at St. Michans! 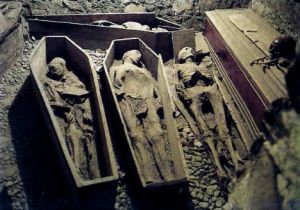 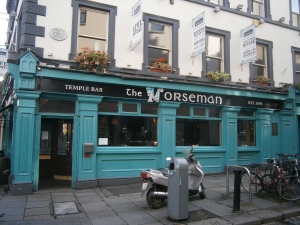 Cheers Dublin! I hope to see you again someday! 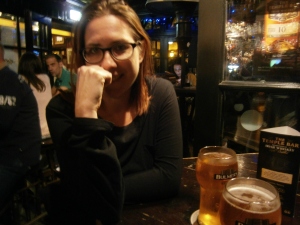