Today is Will Shakespeare’s 448th birthday.  Happy Birthday Will!

Back in 2009, I went to London and then up to Stratford Upon Avon. It’s an amazing place and going there is like stepping back in time. If you have the opportunity to go, I highly suggest you visit the Garrick Inn. 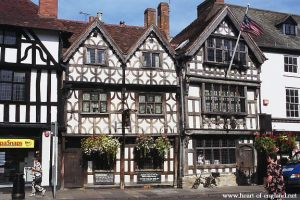 It’s Stratford’s oldest pub. And considering that how old Stratford is, that’s OLD. The building apparently dates back to the 1400’s. And, according to the plaque inside, it’s where the plague started in 1564, the same year old Will was born.

The whole town is amazing. You can tour his home, including the room he was born in. 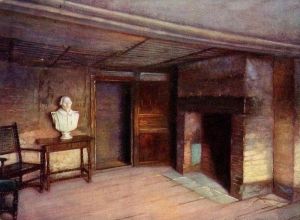 Not to mention the home of Anne Hathaway’s cottage, including the bench they sat on when Will proposed and promised her his second best bed. Such a charmer!

It was an amazing trip for me – not only because I am a self-proclaimed Bardolator but also because it was Shakespeare and specifically his grave that inspired my first novel, Lizzy Speare and the Cursed Tomb. William Shakespeare has the best epitaph in the world: 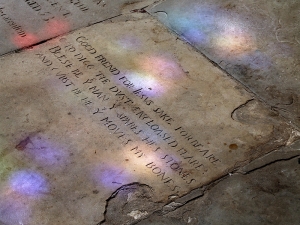 So Shakespeare is buried at Holy Trinity Church inside the chancel. When my husband and I arrived at Stratford, his first question was “What do you want to see first” and without hesitating I said, “His grave.”

Off we went, crossing down the cobblestone streets, weaving through centuries of history. I could barely believe I was about to see Shakespeare’s GRAVE. The greatest playwright – nay, greatest writer – who ever lived. It was  a dream come true.

Until we reached the church and right there at the door was a sign informing us that they Chancel was closed due to repairs.

Remember that scene in Vacation when they finally arrive at Wally World and the damn thing is closed. It was like that, only with a transcontinental flight.

My husband, ever the diplomat, pulled aside the lovely gentleman who ran the church and explained in no uncertain terms that we had to see Shakespeare’s grave. That we had crossed an OCEAN to see Shakespeare’s grave, that it was the most important thing to his wife, who was standing there slightly gobsmacked, to which the lovely British man answered in his lovely British voice: 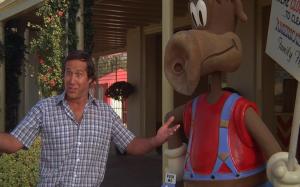 “Sorry folks! Shakespeare’s grave is closed. Moose out front should have told you!”

So the closest I got to seeing Shakespeare’s grave was being about 20 feet away from the Chancel ledge, but in a way, it was close enough. On the way out, I took a stone from the garden which I keep on my writing desk.

We’ll go back, I know that. And this time I’ll make sure the church repairs are finished. In the meantime, at least it won’t be me who moves those bones and gets cursed.

Happy Birthday Will. Thanks for changing my life.