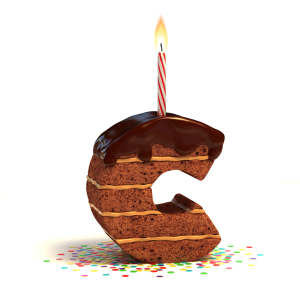 In case it isn’t apparent cancerversary is the anniversary of the day your life was radically changed by a cancer diagnosis. Mine is today. On June 10, 2014 at around 2:00 or so my doctor called. I was at work at the library. I stood in the hall near the bathrooms which was, oddly enough, the most private place I could find where I still got decent reception. And he broke the bad news.

I pretty much said, “Okay” and “thanks.”

He promised to email me my pathology report and he explained that the next step would be finding a surgeon. He suggested I check with my insurance. He gave me a few names to call.

I went downstairs and called my husband.

I don’t know if I said the word cancer or not to him. I might have just said that it came back positive. I don’t actually remember. I know by then I was crying.

Two days later, on my tenth wedding, we met my surgeon. She was nice. She acted like this was no big deal. She used the words small, early and treatable. We liked those words and ate them up like strawberries.

That weekend I met my whole family up in Albany for my nephew’s high school graduation. I told no one. In fact, I kept my cancer a secret for awhile – longer than I had originally planned to.

I’m not a big fan of June 10th. It’s not something I want to celebrate to be honest. My life was sort of cleaved in two on that day and I’m just now, a year later, starting to stitch it back together.

So I suppose I could celebrate another cancerversary. The first surgery? Except then there were two more. The last surgery? But then there was radiation. The last day of radiation? Maybe but I still go for injections every month. It will be years before I hit a point where I only see my oncologist twice a year.

When I was diagnosed lots of people told me that I should appreciate everything now. Suck every last little bit of marrow out of life. And I nodded and agreed but all I could think inside was, but I already do that! I already loved my life. I didn’t need to be shocked into appreciation. I already did! I was a marrow-sucking fool!

But, a year later, here’s something that cancer has given me:

When I was a kid my sister and my friends and I used to play this lava game. Everyone played it so I’m sure you know what I mean. You toss all the couch pillows on the floor and you hop from pillow to pillow and if you touch the “lava” (floor) you die.

I realized recently that my whole life had sort of become one giant game of lava. When I look back on the years the things that stand out where the experiences, the events, the major changes. I hopped from the high school pillow to the college one to the marriage one to the traveling one.

Once those things happened then, and only then, would my “real life” start.

Then like the Velveteen Rabbit I would be the Real Ally.

Some time last year, I stopped thinking that way. I think it was because it was impossible to think any farther than the next day. That was the reach I had. Everything was distilled down to getting through the next 24 hours. Getting the next call from the doctor. From my father telling me about my mother’s failing health. Getting through each day without falling apart. Thinking that way can change you.

So now, there aren’t any more pillows. Sure, there are things that I would like to have happen; things that would be nice and fun and cool but they don’t define me anymore. All the days count equally. The do-nothing days count just as much as the big days. They’re all my days. Mine to have and enjoy and remember.

Like David Foster Wallace said, much more eloquently, this is water.

Or in my case: lava. And I’m not going to die if I don’t make it to the next pillow. I’m going to enjoy being in the lava.

I’m not saying that days like today won’t be hard because they will, but anniversaries have a way of slowing you down, of keeping you looking backwards which, sometimes, is the wrong direction. I’ve already spent too much time mourning my sad days. Right now, my chances of getting cancer (again) are just the same as the rest of you. Granted I take drugs to get me even with you but regardless, I’m not wearing a scarlet C anymore.

So with each good MRI, like the first one I got last week (WOOT!) I’ll celebrate the days that passed and the ones yet to come.

That’s about as much a cancerversary as I’m interested in doing. I’ve changed. And I’ll keep on changing. And I’m okay with that.

In other news, I started a new book this week and it feels really really good to be writing something new. It’s about some old high school friends and a tumble I took off a waterfall leading to a split skull. And eventually a broken heart.

And in the way that the world is weird, one of my dearest friends told me that much of the art that he was doing in HS was related to Keith Haring’s glyphs so, since I wanted to include this, I grabbed Harings journals and right now Haring is going on and on about Sartre’s Saint Genet – which I bought used two weekends ago! Prior to reading the Haring, of course.

And since I started a new novel, I cleaned up my writing room and in case you were wondering what a book really looks like – these are the drafts of Palimpsest. Not even all of them. So just remember that when you’re reading a book behind it are a dozen other working (or not) versions.

Finally I got a few poems published so many thanks to Dead Snakes for taking these and to Drunk Monkeys for this one. And finally to Exercise Bowler for taking this one.

So that’s it. Every day counts. Regardless if it’s a pillow day or a lava day.

It counts just because it exists and it’s yours. Enjoy them. You’re real, too.