“Hope is not blind optimism. It’s not ignoring the enormity of the task ahead or the roadblocks that stand in our path. It’s not sitting on the sidelines or shirking from a fight. Hope is that thing inside us that insists, despite all evidence to the contrary, that something better awaits us if we have the courage to reach for it, and to work for it, and to fight for it. Hope is the belief that destiny will not be written for us, but by us, by the men and women who are not content to settle for the world as it is, who have the courage to remake the world as it should be.” – Barack Obama

As this long year slowly winds down I was thinking about how awful everything has been. And by everything I mean our government, Trump, Paul Ryan and his stupid face, that horrific tax bill, the lies, the money wasted on golfing, the people in Puerto Rico who still have no electricity.

It’s been a terrible year my friends. We’re all weary.

So I started thinking there had to be something right? Something that wasn’t terrible. Some small moments of joy or gratitude where human kind proved themselves to be something more than a scourge upon the earth.

Let’s list them shall we? We do love year end lists, after all.

Okay this was all because of Trump obviously but the Women’s March in DC was one of the most incredible experiences of my life and one of the most important moments in history. With 53% of white women voting for that monster this was a clear visual display of true feminism and with an estimated 1 million people in DC (and another 2-3 million across the country) we lit the fire that is the resistance. Which lead to….

2. All the Other Marches 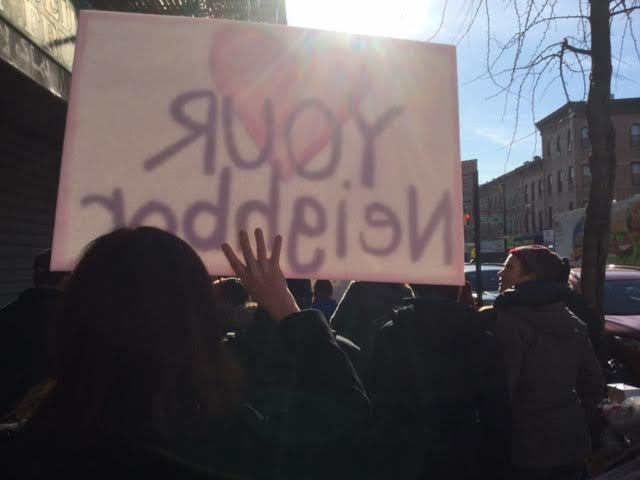 We had a tax march, a day without immigrants strike, a day without women protest, March for Science, protests against the Muslim ban, May Day protests, March for Truth, Impeachment Marches, hell there was even a protest in SPACE. The Women’s March lit a fire that is still burning today. We are doing this. We are standing up and resisting. Here’s a whole long list of everything we have accomplished.

3. People saved each other

In no way is it ever good that a natural disaster happens. That is always a tragedy but within that tragedy we have the opportunity to, as Mister Rogers said, “to look for the helpers.” During Hurricane Harvey so many people risked their lives to save strangers. In the end we all have the chance to be good people. When you are offered that chance, you take it.

Over 10 years ago Tarana Burke started a movement calling to light sexual harassment and assault, trying to make clear the depth of this problem. In 2017, after the Weinstein story broke, #MeToo flooded social media. It was a watershed moment. It allowed men to really see, maybe for the first time, the power that they have. It was a moment when women did not need to be reduced to “sisters or mothers or daughters” but were in fact fellow humans who had experienced harm. Our humanity was on full display

We detach women’s bodies from women’s humanity so frequently and so seamlessly that we have to work backward to realign them. – Heidi Stevens

And more so it showed our Brothers – our true Brothers not just the Good Man® – what we have been fighting for and against. Maybe they will now, finally, join us.

5. The Hate U Give By Angie Thomas

For 43 weeks (at the latest count) The Hate U Give – a powerful story based on the Black Lives Movement – by Angie Thomas has been on the New York Times Best Seller list. While in many ways it is just a drop in the large bucket that is white publishing this is a huge event and has helped to kick open the door to other writers including Nic Stone’s Dear Martin and When Dimple Met Rishi by Sandhya Menon and lots of others. As I’m always saying representation matters. People’s ability to see themselves in the art they experience is revolutionary. It does so much to combat erasure. The world is a diverse rich place. There’s room for everyone. And speaking of representation mattering….

Grossing over 412 million dollars, Patty Jenkin’s lush film was made perfect by Gal Gadot’s exquisite portrayal of Wonder Woman/Princess Diana – a fully realized character whose heroism comes from pure altruism. She is the hero our daughters deserve. Let her be the first of many.

7. The Women of Star Wars 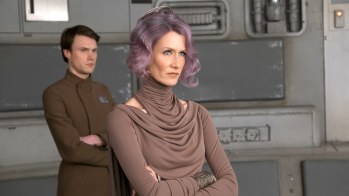 What the Last Jedi gave us more than anything else is Star Wars infused with feminism. With women leading, women planning, women sacrificing for the greater good. This is the most patriarchal white supremacy smashing Star Wars yet. It is a film about letting the past die and building something new and that something new is diverse and women-lead.

After 12 Doctors and fifty years everyone’s favorite two-hearted alien is a woman. I cannot be any more serious when I say that I experience utter and complete JOY when I saw her regenerate (the process by which the Doctor gets a new body hence new actors).  I watched the episode in the theater and there were literal gasps when she appeared.  One of the best things about it is how goddamn happy she is when she sees herself. Look at that smile. They say every generation gets the Doctor they need. Never has this felt more true. 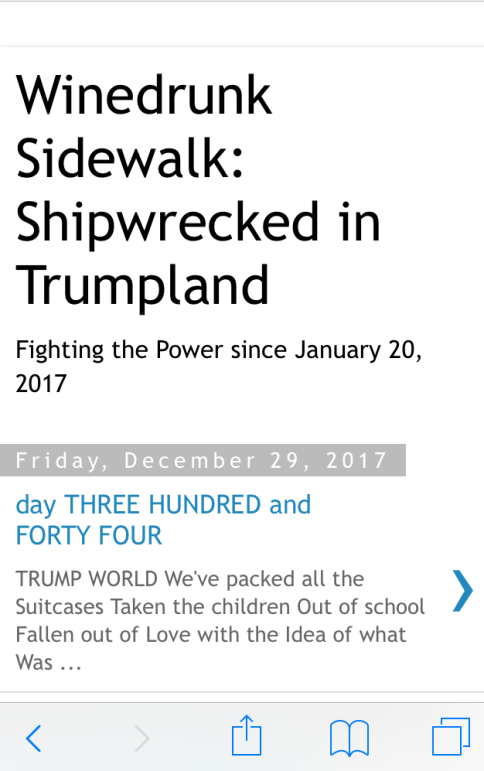 As of this posting it is day 344 since Trump took office and for all 344 days John Grochalski, (poet, novelist, Beatles impersonator, and all around good guy) has been posting a piece of art every single day – plus week end recaps of all the horrors the government has tried to do. The blog is a steady act of resistance because in these horrible times ART IS RESISTANCE. We must stay vigilant, kittens. We must keep resisting. Chins up. Claws out. If you have something send it to winedrunksidewalk at gmail dot com. We are all going to keep this resistance going. 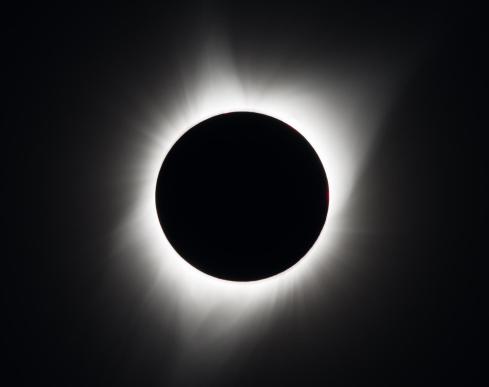 For a few brief moments on August 21, 2017 it felt like the whole nation stopped what they were doing and looked up at the solar eclipse as the moon passed between the earth and the sun. In that moment we were all reminded that our lives are a complete fluke – that we are standing on a rock that is hurtling through space. That every one of us is so incredibly lucky just to be here. That we should never ever forget that fact.

Oh….and for good measure, one more.

Okay I admit that this has very little bearing on anyone else but I figure if you’re reading this you probably know me and maybe you like me so this might be good news. It’s good news for me. Especially after 3+ years. It’s scary of course but also good. And more so it’s time. It’s time to move on. It’s time to get back to the business of living – the messy beautiful business of living.

So Happy New Year everyone.

Let’s make 2018 the most magical of all. Let’s stay curious. Let’s go exploring.

But most of all let’s be kind to one another and let’s never ever lose hope.

Even Barack has hope.

As we count down to the new year, we get to reflect and prepare for what’s ahead. For all the bad news that seemed to dominate our collective consciousness, there are countless stories from this year that remind us what's best about America.